Where Does This Thing Even Belong?

Marriage is a giant blending of stuff, which I mean in the simplest terms, as in things or items. When we moved into our first apartment as a married couple we moved in his and hers guitars, my crappy lamp, his nicer lamp, approximately 50 items of men's clothing, and 300 of women's, my broken chair, his parent's microfiber reclining love seat, my art, and well over a hundred books on poetry, psychology, religion, cooking, fiction, and political science. We did not have a book shelf. We bought more items to add to the mess: bookshelves, a coffee table, a trash can, and washing machine to name a few. 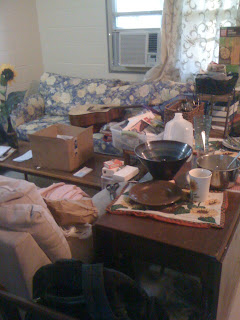 Now, our stuff is blended with the stuff of the man whom we are subleasing our summer housing from.

We live in a obstacle course. To get to the air conditioning, one must step onto the dining table chair and dive into the love seat. From there, jump over the coffee table and onto the couch without landing on the guitar. 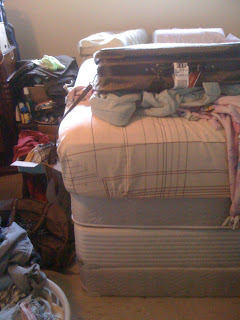 As we were waiting for the Powerball drawing last night (anything that might get us out of here faster), we found ourselves watching ABC's Secret Millionaire. Producers send millionaires to the roughest of the rough neighborhoods with only the amount of cash equivalent to the food-stamps that a person in poverty would receive. The millionaires must search the neighborhoods for "hidden heros," people who seek to be of service in these communities. At the end of each episode, the millionaires write checks to whomever they believe to be deserving.

In one episode, the millionaire, an apparent workaholic, was worth $500 million. The millionaire appeared to be participating in the show in an attempt to find greater contentment than his riches offered. He said, "my brother tells me that the more stuff that you accumulate the more stress you have." I think that we can take his brother's comment as a criticism because judging from the quick glimpse of the interiors of this millionaire's mansion, he was not a minimalist.

That quotation has been swimming around my head today. I swear that I descend from hunter-gatherers because both my dad and I accumulate stuff like none-other. As to the quotation, my stuff is stressing me out! I have been in tears almost daily of late because I am so afraid that we will have to move all of my crap into another temporary space before we can settle into a house.


Now, there's this backpack. Made from an old grandpa couch by a local Iowa City artist, it's tan with giant flowers and out of my price range, but I told myself I would buy it if I were accepted to the Iowa Writers' Workshop. When I was not accepted, a few people suggested that I should just buy it anyways since I liked it so much. I didn't. Raised by a conservative small business owner, who himself was raised by a blue dog democrat and small business owner, it's against my nature. I've heard enough times about how not every kid at the soccer game should get a trophy because it only praises mediocrity and stunts exceptional performance. Though I must say that in practice my dad has never actually hesitated to give me anything that would make me happy, earned or not. Still I wanted to earn the backpack.

Today I broke down again. Anxious about finding a place to live, moving all my crap, and my upcoming poetry class, I found myself tempted to engage in retail therapy. In particular, I wanted something that would encourage me, such as the handmade journal I spotted at a craft fair, which was decorated with a sunflower and the words, "Be happy," and at the bottom, "the secret is, there is no secret." Amidst the whirl of the Iowa City Craft Fair, I sat with Owen and told him of my anxiety and how I wondered if that $30 journal would help me feel calmer for my class, so that I could get more out of it. That's when he told me that he had secretly been planning on buying me the grandpa couch backpack to boost my confidence for my poetry class.

For a moment I hesitated. I hadn't earned it like I wanted to; I didn't deserve it. Yet the gesture was so loving on his part that I couldn't reject his efforts. The reasoning for gaining the backpack had completely changed from a reward to a generous act of encouragement from my husband, who's usually so careful with spending.

We walked to the store to find that the backpack was gone. Of course, my bad mood relapsed at that point as I tried not to tear up over something like a backpack. That's my problem. (Well, that's one of my problems.) I put too much symbolism into too many things.

My grandfather immigrated to the United States from Germany when he was eight years old. The only items that I remember seeing from this journey are the German coins that my great grandmother gave me when I was a little girl. I have always kept these coins in a special place in my dresser drawers. What special thing of mine will my grandchildren keep? I have so much that I'm afraid that none of it will be special, and they'll just throw it all out, assuming they aren't boarder-line hoarders like myself.

I won't get the excitement of carrying that grandpa couch backpack to my first day of class, but I know that I will bring Owen's support, encouragement, and confidence that I can succeed with me as I face my anxiety regarding my own abilities.
Posted by Summer (and Owen) at 10:14 PM