I am hanging out in Colorado this week!  I can't even express how happy I am to be here to see my little sister graduate from high school, and not only graduate, but also give the commencement speech at the ceremony! Taylor may not like me saying this, but the girl couldn't even order food at restaurants when she was a kid because she was too shy to talk to the waiter! Something in her changed when I left for college because just yesterday I saw her calmly deliver an intelligently written and clearly spoken speech in front of hundreds of people. It's difficult to wrap my head around. 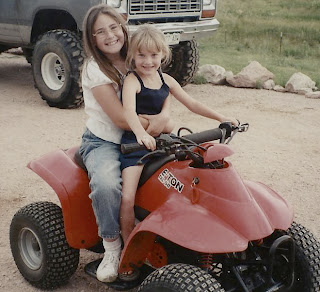 Before I knew Owen there was Taylor. I had more fun with her than anyone else, and I got more angry at her than anyone else. Growing up Taylor and I were always competing and distinguishing ourselves from one another. I am a tall brunette with sizable hips, and she is a tiny blonde. I love to speak my thoughts, and she does not  like to share her opinion very frequently. Academically we each wanted to preform better than the other. Being the older and more developed sister, I thought of her as the weaker of the two of us, on every level. We were not affectionate.

For my birthday one year, a friend gave me the book When God Writes Your Love Story by Eric and Leslie Ludy. It sat on my bookshelf for at least two years until, saddened from my first break up, I picked it up. I don't remember most of it, and I thought a lot of it was pretty cheesy, but one bit of advice from this book really changed my relationships for the better. Eric Ludy describes his relationship with his brother, which seems rather similar to my relationship with my sister in that they were not verbally encouraging and lived in competition. At one point Eric realizes that before he can have a marriage he needs to heal whatever struggles he has had with his family and most importantly his brother. Though even the thought of apologizing to his brother was extremely awkward, he did, and their relationship became more loving.

The Ludy's say that you will treat your spouse the same way that you treat your family, and thus your family is practice for having a marriage. This concept makes sense to me. You see family when you're at your worst: when you are grouchy from work, hunger, or whatever. Later, your spouse takes over that roll. After reading the book, I reflected on my relationships with my own sister. I realized that I spent too much time feeling annoyed and frustrated with her and not enough time doing nice things for her or encouraging her. I still have a hard time being verbally affectionate, but I try to show love in other ways like petting her hair or sharing my stuff with her more readily. Since making the effort to be nicer to her, my relationship with her has been much better. I don't know for sure that becoming nicer to my sister has improved my relationship with Owen, but I highly suspect that it has.

When Taylor started thinking about college, I knew that St. Olaf would be the perfect fit for her. I invited her to stay with me in the dorms and see the campus. While she was visiting me, I still had class, so she would sit and read in the student center without me. I had many people tell me that they saw her there and instantly knew her as my sister. This information surprised me because we thought of ourselves as being so different! My friends and acquaintances told me that not only did we look exactly alike, but we also had the same mannerisms. At one point in my life, I would have been frustrated by this information. Yet, Taylor has grown up to be such a beautiful, intelligent, strong, and kind person that I've very much embraced the comparison, and I like that she always gets my jokes. 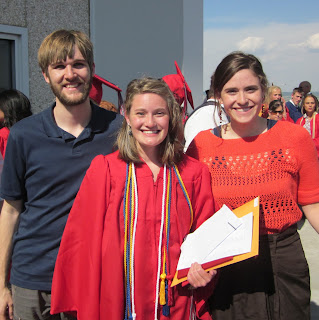