Owen and I moved into our new condo this week! A darkness has lifted from us, and we are finally feeling comfortable in our living space. However, moving in has been a slow process. We rush to our apartment to grab more stuff between work, volunteering, church, yoga, grocery shopping, cooking dinner... we barely catch a break to talk to each other, and thus I won't spend too long on this blog post today, when I have barely had time to talk to my husband.

During busy times like this, we've had to come to an acceptance that the love is there, whether or not we can express it through the day. Owen describes it as an "assumed" love. As I rush from work to class, I direct Owen to grab lunch for me, and I barely slow down enough to ask how he is or say thank you. Despite this I do want him to be happy, and I am thankful for his help. We just have to know, until the end of the day.

Pillow talk: the time of day when couples slow down and share thoughts before falling asleep. Though Owen is a night owl and I am a morning person, we rarely go to bed without each other. When we don't have an hour to ourselves the whole day, those few minutes of pillow talk confirm our solidarity and provide us with emotional balance. It's not much, but it keeps us steady for a time.

Oh busyness. It's certainly an addiction. Amazingly I can find myself missing Owen even as we sit next to each other, working on our computers at the coffee shop. Today I am going to choose to neglect writing anymore and ask Owen how he is.
Posted by Summer (and Owen) at 8:39 PM 0 comments 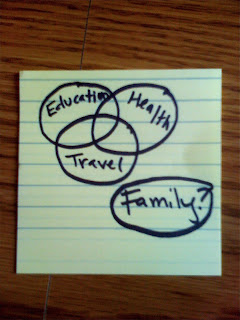 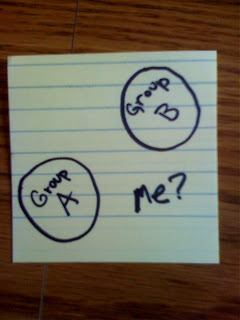 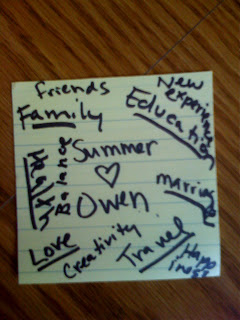 Am I Supposed to Just Learn to Live With It?

I have an incurably Type A personality. However, the majority of my close friends and my husband are Type B. I love them and they drive me crazy with their vague scheduling patterns. Owen makes me late to something almost every day, which makes my eye twitch a little. Frustratingly for my current academic pursuits, Type A processing also makes poetry difficult for me. Poets are supposed to dwell and find comfort in ambiguity. I tie all loose ends up with a bow, including any general relationship or life questions.

Every time Owen and I have an argument I quickly find the reason and solution for the argument and convince Owen of my findings. Yet we argue about the same things over and over, and for some reason I always feel blindsided. I can't even count how many times I thought we had solved the Owen feeling disillusioned thing. (I just have to stop and roll my eyes at myself for thinking that we could conclude something as emotionally complex as that in one sitting.)

We're not the only couple that fights about the same thing over and over. The most frequent question I've heard might actually be, "So, am I supposed to just learn to live with it?"

Well, yeah.
Some things just don't change. My irrational desire to be on time to everything will always make me hurry Owen along when he wants to slow down and enjoy the view, and his inefficient time management skills will always make me anxiously late. Hopefully Owen won't always be disillusioned, but I'm realizing that I should just get comfortable with it because this might take a few years.

Every relationship deals with "perpetual" disagreements as John M. Gottman puts it. In his book The Seven Principles of Making Marriage Work, he attempts to dispel relationship myths by describing his empirical research on healthy marriages. His findings are very interesting; Owen and I highly recommend the book as one that will help you to understand what happy marriage looks like in a society where it can be so difficult to find. Anyways, he asserts that even happy couples have certain subjects that they will always argue about, and he suggests ways of dealing with those arguments.

When I attempt to explain to others that Yes, you do just have to learn to live with it, I often get the response, "So, it's like the good outweighs the bad?" Kind of, but it seems more complex than that to me. For one thing, I don't think that's true in every moment. Many long-married couples report having "bad years," where the good actually didn't always outweigh the bad. Also, all of us go through biological cycles where we feel more or less happy regardless of our surroundings or personal philosophies. During these cycles, we attempt to rationalize our emotions, often putting the blame for the unhappiness on our partners. For women we have a name for this phenomenon, PMS, but men experience it to some degree as well.

When it comes to deciding if you want to spend your life with another person it can't come down to rationalization. Consider loyalty. On one hand, loyalty can actually lead to corruption such as in economies where the only was to get by in life is by knowing someone. Because of loyalty, good people with no connections might unfairly miss out on opportunities. However, loyalty is absolutely key in marriage. You have to be unfairly loyal for it to work. In a sense dealing with your partner's flaws has more to do with overwhelming dedication than a tally chart of good and bad moments. Sometimes your partner won't deserve your continued attempts to heal problems between you. Sometimes you won't deserve theirs. If we try to keep tally of deserved and undeserved, positive and negative, good and bad, we'll just drive ourselves crazy. Loving someone can't come down to a pros and cons list.

Though "Type A" has a positive connotation most of the time, especially in the business world, it's not always the best route to take. Sometimes we just have to Type B it and allow things to be unsolved. We have to allow arguments and frustrations to be left as open wounds and be okay with it. Of course, not all flaws are equal. If your partner's flaw is a nasty temper that leaves you feeling unsafe, you shouldn't learn to live with it, you should get away and find someone else. If your partner, like mine, just has some annoying communication habits, that doesn't need to bring the end to a good relationship.
Posted by Summer (and Owen) at 2:38 PM 0 comments