This week, my grandparents celebrate their 50th wedding anniversary! In 1963 Werner and Patricia said their vows in a small Texas church and headed to a nearby restaurant with a few close friends for a fried chicken dinner.  They spent the night at a Ramada Inn in town, which my grandmother described in her wedding book as being very nice. 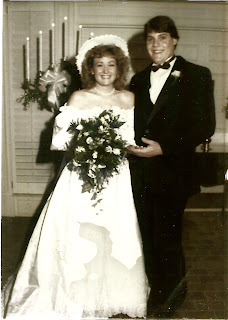 Twenty-three years later my parents had an evening wedding that included a ceremony and small reception. Paul and Traci had a wedding cake table decorated with satin flowers that my mother had made.

They were gifted a honeymoon in Disney World, near where my great grandmother lived. (Their honeymoon included visiting with Grandma for some of the time...) 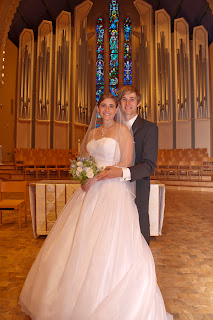 Owen and I were married in the St. Olaf College chapel in Minnesota. We held our reception ten minutes away in a tent with a formal dinner with thirty or so bottles of wine, several beautiful cakes, and a dance floor with a six-hour long playlist and a few wedding games.

Our wedding day was so stressful that I ended up crying for at least a half hour upon arriving to the reception site. We escaped to Napa Valley for our honeymoon, which was largely spent recovering from the stress of the wedding.

What has happened in wedding culture that makes us feel like we need to make our wedding days into such a show?

Fifty years ago Werner and Patricia had a wedding without a photographer, reception dinner, dance floor, or long honeymoon, but the smiles in their one and only picture are so beautiful.

In many ways their marriage continues to display the simple happiness of their wedding. For their anniversary this year they decided to take a trip to their favorite vacation spot in Estes Park, Colorado where they rent a cabin and don't leave it the whole week. When I called them to wish them a happy anniversary they were looking out the windows enjoying the view and watching for wildlife. My grandmother told me, as she often does, their story.

Because they were always seated alphabetically in school, Werner sat in front of Patricia every year starting in the seventh grade. They didn't talk to one another until the eleventh grade when they were roped into a double date. As the story goes, Werner had a car and his friend had a date with a girl who was friends with Patricia. His friend needed Werner to drive, and Patricia was brought as Werner's date.  Though the friends didn't really hit it off, my grandparents quickly fell in love and were married a few years later.

As I was Growing up my grandparents emphasized getting away from televisions, computers, and phones. They taught me how to find happiness in many simple pleasures that I now share with Owen including card games, puzzles, quilting, and hiking.