A Purr of Energy

Feeling too busy for a dog, and really preferring cats anyways, we found our four month old kitten at a local animal shelter. With a little difficulty agreeing on a name she ended up with two names: MaryMilo. 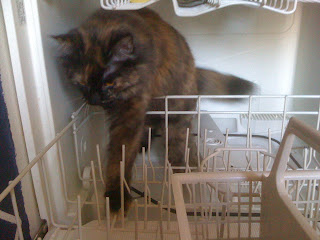 She has proven herself naughty by constantly exploring places she's not supposed to be. 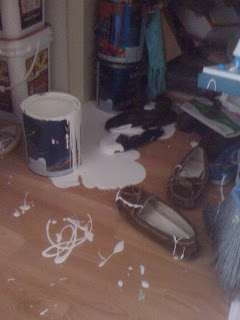 One day I had spent the entire afternoon repairing my baby blanket that she had shredded and stood up from my sewing machine to find that she had spilled paint all over our shoes and floor.

The lid to the paint can was warped and she had knocked it over. I panicked, picked up the paint can, and brought it, dripping, to the garbage.

We kept her away from the paint for three days before it dried enough for us to peel it off of the floor.

Yet, MaryMilo's naughtiness isn't entirely a bad thing. It provides something to talk about. I can remember several nights in college where I would be hanging out with a friend or two, and none of us would have the energy to create energy for the group. It reminds me of an episode of Everybody Loves Raymond where Raymond and Deborah go out for dinner and can't find anything to talk about. Deborah gets upset and says that they've become "one of those couples."

When we first brought MaryMilo home we were in the middle of a overwhelming semester in Owen's PhD program. We had spend the preceding weeks drained of energy and it was getting to a point where neither of us could gather enough energy to cheer the other.  MaryMilo brought a spark of life into the house and provided us with the comedic relief we needed. One evening when we were both frustrated and low energy, MaryMilo bolted down the stairs jumped on the round chair and knocked it over causing both of us to laugh. Had she not been there, we may not have laughed together that night.

Whether we're chasing her away from the countertops, throwing paintbrushes for her to fetch, or cuddling with her on the couch, MaryMilo's extreme kitten-energy is contagious and helps give us the energy we need to encourage each other through stressful times.
Posted by Summer (and Owen) at 10:18 AM